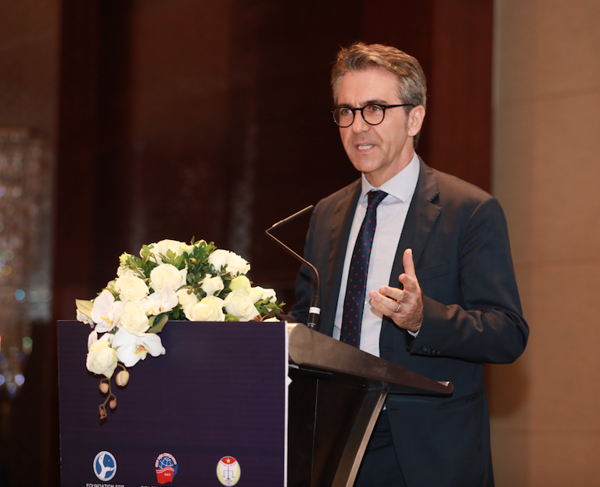 It is my great pleasure to be here with you,  after this first intensive day of work and exchanges, in the frame of the 12th international Conference on South China Sea.

No need to remind the importance of this event, organised now for 12 consecutive years, and which the EU is happy to co-sponsor for the second time. Over the years, the South China Sea conference organised by the Diplomatic Academy of Vietnam has established a solid reputation in the region, among scholars and practitioners, decision makers and diplomats, to be one of the key event in the course of the year, allowing frank and open debate, on issues related to maritime security in the South China Sea – or East Sea. The topic is not new, but the stakes are getting every day higher, in the backdrop of repeated incidents at sea, increasing militarisation and regular breaches of international law, where it seems that the prevailing rule is “might makes right”.

On this last point, let me share with you a few observations. As Ambassador of the European Union to Vietnam, I can only reiterate to our Vietnamese friends and partners in the region, that the EU will never abide by this rule. Our position is clear and has been – constantly and repeatedly – reaffirmed over the years and more recently, by HR/VP Borrell during the ASEAN-EU Ministerial conference last September: “We cannot allow countries to unilaterally undermine international law and maritime security in the SCS, thereby representing a serious threat to the peaceful development of the region”.

The motives of the engagement of the EU towards peace and stability in the region are twofold: economic and strategic.

On this base, the EU and its Member States have over the last three years, stepped up their engagement in the region. First, though the adoption of Council’s conclusions in May 2018, on “Enhanced security cooperation in and with Asia” where important possibilities to deepen security cooperation with EU strategic partners in Asia were outlined, including maritime security, cyber security, counter terrorism, hybrid threats, conflict prevention, proliferation of chemical, biological, radiological and nuclear weapons, and the development of regional cooperative orders.

Concretely, this led to the signature in October 2019 of a Framework Participation Agreement with Vietnam, which allows Vietnam to participate in EU Common Security and Defence missions and operations around the world.

New funding and initiatives have been made available: only on maritime security, we have now three projects ready to be launched, dealing with a vast array of topics, from maritime domain awareness (information exchange and analysis, crisis/incident management, strengthening inter-agency cooperation in maritime surveillance, policing, investigation and judicial matters) to confidence building measures and support to the implementation of international legal instruments.

Furthermore, the EU is now deploying military advisers to its Delegations in many countries of Asia, which will allow to play a greater role on “hard” security matters. The EU is also developing a new operational concept, called Coordinated Maritime Presence (CMP). Under this concept, the Navies of participating MS provide naval assets that take turns patrolling a given geographical region in a coordinated way. This concept is currently tested in the Gulf of Guinea and could be used in a not too distant future in other parts of the world, including in the South China Sea.

Those initiatives go side by side with the cooperation our Member States are developing at bilateral level in the region: the concept of Indo-Pacific is getting more attention in the EU, with DE, FR and NL elaborating “Indo-Pacific strategies”, complemented by an increasing presence in the waters, as navy exercises and port calls are planned by several MS next year.

Above all, the EU and its MS are fully committed to a rule based-order, where all parties should refrain from the threat or use of force, the militarisation of maritime features and from any provocative action in general. We believe in peaceful settlement of disputes, we stick to the principles enshrined in the UN Convention on the Law of the Sea.

In this context, we do support the conclusion of a comprehensive and legally binding Code of Conduct. On this particular point, let me share with you a very candid observation: we are in no haste, content matters above all and we are aiming at an effective, comprehensive and legally binding Code of Conduct, following negotiations conducted in a fair and balanced manner, and protecting the interests of all stakeholders. If not, better no Code. No law is always to be preferred to a bad law.

In conclusion, and quoting the key note speech delivered earlier today by Read Admiral Juergen Ehle, Senior Military Adviser to the European External Action Service, the EU is projecting its role of security provider in the Asia Pacific as a predictable and reliable partner. It has no hidden agenda, only an open and public one, which I have just summarised to you now.

Many thanks for your attention, I wish you fruitful discussions and I am looking forward to receive the conclusions of your works.